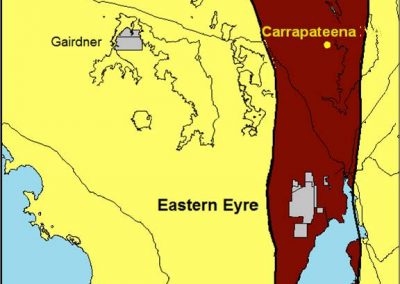 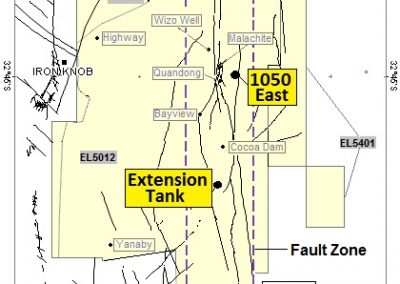 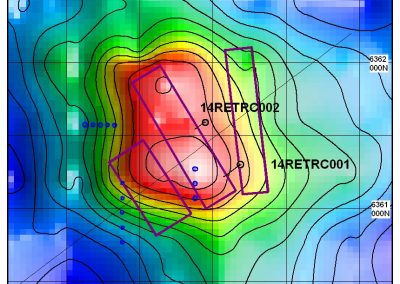 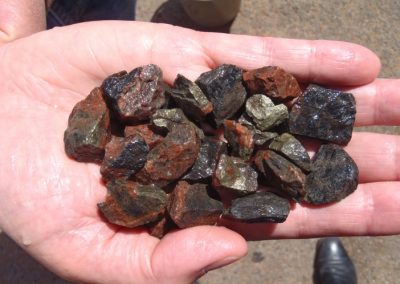 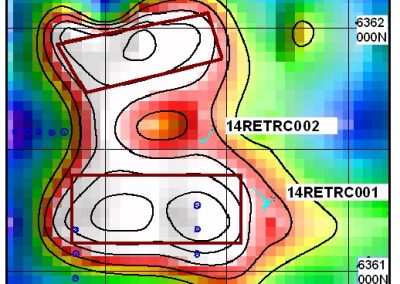 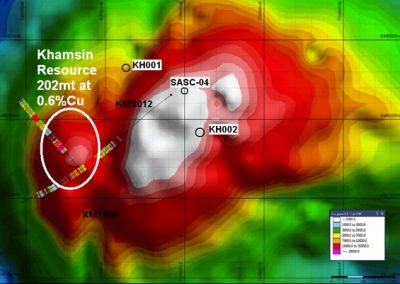 • IOCG targets.  Renascor has completed a ground magnetic survey over the project area.  The survey has delineated an area of strong magnetic relief (shown in white in Figure 4) parallel to the inferred margin of intrusive Hiltaba granites.  This area of strong magnetics has not been tested previously, as earlier drilling in the area (DH-KK05R01) was sited on gravity, with significantly lower magnetic response.  Historical rock chip sampling in the area indicates possible granite hornfels or skarn style base metal/silver anomalism to the northeast of the magnetic trend and significant nickel, cobalt and copper anomalism associated with a magnetic mafic intrusive to the northwest.  The geologic environment of the Gairdner Project, coupled with the strong magnetic anomaly, provides important similarities between Gairdner and the Earnest Henry IOCGU deposit in Queensland.

• Results to date.  The results received to date cover an area of inferred Lower Gawler Range Volcanics, to the north of the “Border” aeromagnetic anomaly, where aeromagnetic data suggests an intersection of strong north-west and north-east faults. Silver results for this local area (Summarised in Figure 3 – Silver results from Gairdner, compared to Investigator Resources’ results for Paris Prospect.) include silver peak values of 150 to 330 parts per billion (ppb) in five discrete zones of +50 ppb silver, over areas of up to approximately 2.5 km2. The most northern anomaly extends over a length of over 1,500 metres at +50 ppb silver, with adjacent 300 metre spaced samples returning 260 to 270 ppb silver. While additional, closer-spaced sampling will be required to ascertain the extent of the anomalous areas, their inferred extent at 50 ppb silver is comparable to that observed at Investigator’s Paris project from samples taken at 50 metre intervals.

• Next steps.  Renascor intends to perform closer-spaced, infill sampling over the most prospective anomalous zones identified in the soil assays received to date, as well as any additional anomalous zones identified in assays. Subsequently, Renascor expects to drill in the project area, in which magnetic targets prospective for iron-oxide, copper-gold (IOCG) deposits have already been identified. Silver or base metal targets identified from soil sampling programs are expected to be included in this drill program.