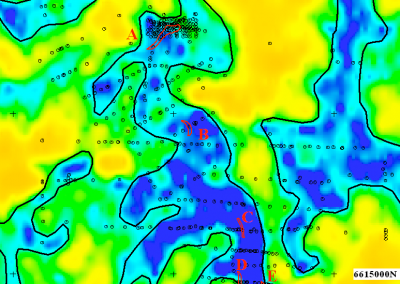 Warrior is an historic uranium project discovered by PNC Exploration Pty Ltd (PNC), the former Japanese government sponsored uranium exploration company, in the late 1970s. The project has been subject to infrequent exploration since this time. Renascor acquired the project in 2013 in exchange for a residual net smelter royalty of 1%.

Renascor’s strategy at Warrior is to utilise the significant exploration work undertaken by PNC in an era of low uranium prices to create low cost opportunities to identify a valuable resource under present market conditions.  Prior to relinquishing Warrior in the early 1980s, PNC identified seven discrete zones of elevated uranium mineralisation.  (See Figure 1)  Limited exploration efforts, largely undertaken between 2005 and 2008, identified prospective extensions to the Warrior paleochannel, as well as confirming the presence of elevated uranium throughout the project area.

Through the use of additional coring drilling and a prompt fission neutron (PFN) tool, in both the elevated uranium zones discovered by PNC, as well as extensions to the paleochannels suggested by later exploration work, Renascor considers Warrior to offer significant prospects for the delineation of an economic uranium ore body.  During the reporting period, Renascor completed an assessment of the existing drill data and confirmed a significant variation between air core results and results obtained from the limited core sampling available from adjacent holes. Renascor has identified targets for testing using core drilling and rotary mud drilling with a PFN probe.  Renascor anticipates commencing drill-testing following indications of a recovery in the uranium price.