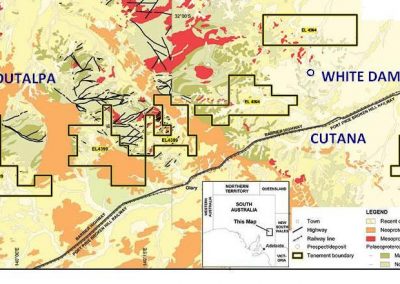 The Outalpa Project covers an area of 287 km2 in the Olary region, about 25km from Renascor’s Cutana Project.

The Outalpa Project covers an area of 287 km2 in the Olary region, about 350 km north-east of Adelaide. Important mineral deposits in this area include the Radium Hill uranium mine and the recently commissioned White Dam gold mine.

Renascor performed systematic, multi-element soil sampling over limited portions of its 100%-owned Outalpa Project in northeast South Australia in March 2011.  The sampling program, which was targeting uranium and copper, showed limited responses for these minerals, however, several elevated gold zones were detected.  Given the favourable results from the sampling program over the Cutana Project, which is located in a similar geologic setting within 25 kilometres of the Outalpa Project, Renascor believes the Outalpa Project could yield similarly prospective gold targets.  Accordingly Renascor is planning systematic gold sampling in the project area.